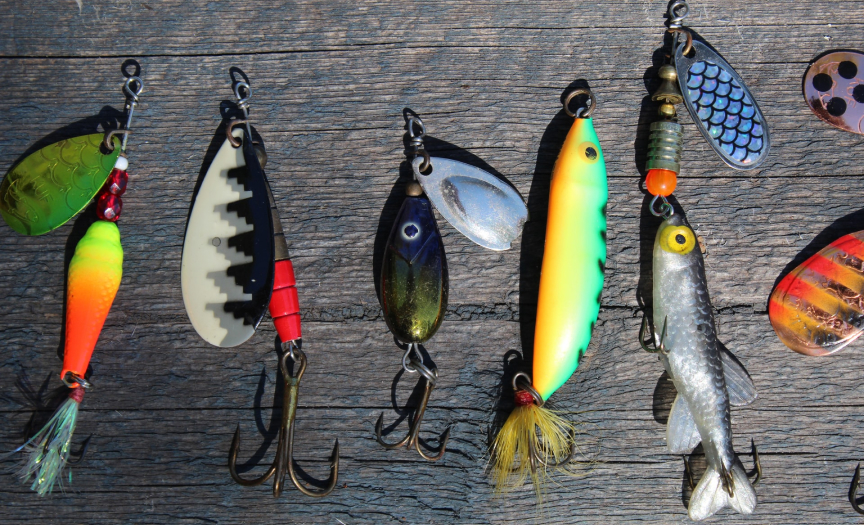 Lures have always been an effective fishing tool for most anglers since centuries ago. They are convincing and could attract a lot of fish. Undeniably, however, using a lure requires skills. But it’s a skill you can easily learn as long as you know how to choose the right lure, the techniques in fishing with lures, and the important things you need to remember when you go fishing using this tool.

What to consider when choosing lures?

What makes a lure effective is that it mimics the natural prey of the fish you desire to catch. It imitates the appearance of the fish, its shape, its color, and even its movements. There are a lot of lures to choose from, varying in colors, materials used, weight, and shape. These are all crafted to suit a specific scenario or to cater to specific species of fish.

What you want to achieve is, as much as possible, to match the prey of the fish you are catching. For example, a fish that preys on tiny ones would less likely to bite a large lure. You might be standing all day long thinking you’re not an effective angler when, in fact, you’re just using the incorrect lure!

Not only are your concern about what type of prey your prey feeds on, but also the water condition. This determines the weight that your lure must-have. For example, if the current is strong or if it’s a windy day, it would be more ideal to use heavier lures. For calmer conditions, use lightweight ones.

Aside from weight, you would also want to consider the color of your lure. If the water is murky or muddy, a bright-colored lure is more appropriate because it can be seen easily by the fish you desire to catch. However, you could not use the same bright-colored lure to attract fish in crystal-clear waters, for they may be spooked easily by bright-colored materials.

What are your lure options?

After knowing the specific things to consider when choosing lures, there are several common types of fishing lures you can choose from:

One distinct feature of this lure is its small spinner blades, commonly made out of thin metals, that are oval in shape. Acting like a propeller when used through water, this lure can effectively attract fish because of its movement. Also because of its reflective coating, it could catch the light and become more attractive for fish because of its glistening. This mimics small, swimming baitfish like shiners or minnows, therefore ideal for fish predators such as spikes and bass. You can also choose different colors, sizes, and weights of spinnerbaits depending on the constraints that you have to consider.

This lure is called “spoon” because it imitates the head of the spoon without the handle. Despite being one of the oldest, it is even now one of the most reliable tools you can use for fish catching. The wobbling of this lure when it sinks through the water creates an illusion of a severed fish that could attract many species, along with its metallic surface that reflects sunbeams. Some spoons have red and white colors (oftentimes called red devil) for a more deceiving effect.

If you wish to catch large fish like bass or other freshwater fish of that size, jigs are among the most effective lures. These types of fish are very responsive to the vertical “jigging” of this lure. This comes in three varieties: football jigs, swim jigs and flipping jigs. Just be wary of the technique you’re employing in using each variety.

What makes buzzbait remarkably different is the vibration it produces when it sinks through the water. This movement would surely attract those who cannot see the lure and make them go out of their hiding places, thinking that they’re seeing real prey. These vibrations are also combined with the lures attractive color, making it more efficient for your fishing adventure.

Used customarily in open oceans, trolling lures are usually effective if you want to catch pelagic fish because of its movements.

Plugs may be made out of wood or plastic. It is very flexible, as you can use it if you want to skim water surfaces, trail mid-water, or even troll deep down at the bottom of the water. This also has a lighter version if you want to fish in the dark.

What distinguishes this lure from the others is it imitates a duck, featuring a bill on its front. This may be made of plastic or wood, usually used for big fish like bass. Some crankbait lures feature rattlers and trailing hooks.

What are the different luring techniques?

Let’s suppose you have already chosen the lure that best fits you and the location where you will be fishing. Your next question might be, “How am I going to do it?” Luring is a discipline. There are several techniques to do it successfully, with each varying technique dictated by the fish that you want to catch and of course the lure that you have in hand.

Among the luring techniques, you would like to remember is “walking the dog.” This is one of the most effective and helpful techniques wherein you move your wrist as if you’re taking your pet dog into a stroll. A surface lure would work best for this technique, plus a little weight on the lure’s rear end.

To execute this technique, you have to point your rod tip to the water at a 45-degree angle. Then, in a jerking motion, drag the rod tip to a 90-degree angle. After reeling the slack up in the line, jerk it again to achieve the “dog-walking” motion. For more effective baiting, you would want to initially move the rod slowly and then increase the speed gradually to imitate how a baitfish would swim.

One of the reasons why you’re using a lure is you want to imitate how the fish moves. As much as possible, observe the swimming of the baitfish and with your wrist, slowly mimic it. This can be achieved by casting the lure in the deep as soon as you’ve used two pop lures for the best effect. You have to move it in a twitching motion, changing your speed from time to time and changing the lure’s direction as well. Varying the movement is one thing you want to remember, as this makes the lure more attractive and more noticeable. No fish would be attracted to an immobile lure!

Sometimes, however, moving the lure a lot could not attract hesitant fish. There are cautious fish that would not bite your lure when they notice that it keeps moving. One way to make them be attracted to your bait is by making your lure imitate the behavior of injured and therefore vulnerable fish prey. This can be achieved when you let your lure stay still once you’ve submerged it in the water. Take a pause until there are no ripples and wait for a little while before making small movements again. It would be helpful to count to ten between holding the lure still and making a move.

One effective way as well is through moving the tip of the rod to give an illusion of an erratic, sinking movement – that which would tell your target fish that its prey is easy to catch. Don’t stop doing this until the fish gets very close to your lure.

Some fish hide way underneath the water and might not notice your lure if it just lingers through the water’s surface. You would also want to let your lure sink deeper into the territory to catch big fish, for this is where most of them stay. To do this, you just need to cast your lure and make it stay still until the line starts sinking. Wait for several moments before starting to manipulate your lure. Make several retrieval reels in long intervals before letting the lure sink deep in the water again.

For lures that are not that heavy, constant reeling is required to make them stay underwater, or else they will stay floating on the surface.

You would also want to imitate the behavior and the movement of several flying insects or some other type of prey. With this technique, you could catch fish that stay in shallow waters, such as a sunfish. After casting the rule, just avoid any movement until the lure is still and the ripples are gone. Maintain a sweeping movement on the surface of the water. You can do this quickly or slowly according to how assertive your target fish is.

If you want to move around while trying to catch your prey, you can always troll using your boat or your kayak. Using different kinds of a lure, you can imitate how a traveling fish moves around, plus you can also cover more surface area than just staying in one spot. You can go slowly as you wind the line behind your moving boat. Alternately, you can sink the lure in the depth that you desire, the slowly move forward without reeling.

What are things to remember when luring?

Some beginning anglers usually jerk the lines a lot that their lures make too many movements. These excessive motions only make fish avoid your lure than getting attracted to it. You need to remember that luring requires subtlety. In fishing, you need to maintain calmness so as not to scare your targets. Start slowly at first and gradually increase your speed for a less shocking effect.

When you already felt that the fish has bitten your lure, stop your reeling and move the lure horizontally until the bobber is underwater. Then, yank your line forcefully to make sure that once the bait is bitten, the hook will be buried deep into the fish’s lips.

One mistake in luring is that some anglers stay in one spot when they are casting. When you keep on casting in the same area, it is less likely that you will catch other fish luring somewhere else. Maybe the area you have chosen is naturally not abundant of fish or maybe the fish you are trying to catch has already detected your lure, making it go away.

There are also cases when the fish spits back your lure and the hook does not catch his lips. By this time, the fish shall have already recognized your lure, making it move elsewhere. This is also a sign that you have to move around and find another spot.

It would also be helpful if you vary your speed. Constant speed is not a good imitation of fish bait.

Of course, you need to check your lure from time to time. There are cases when your lure could catch weeds and other debris, making it less effective. This debris might add up to the lure’s weight. This might also change the lure’s color, size, and would not anymore be a mimicry of the baitfish.

Take care of your lures

After using your lure and after a hopefully successful catch, you have to make sure that your lure is taken care of for future use. Keep them dry immediately so that hooks won’t get rust. If they did, you can no longer use them again as they may break after the second use.

In this article, you have learned how to choose the correct lure, the different techniques, and the important things you need to remember when luring. Surely, it will take time to learn all these, but it always starts with trying to execute everything that has been written here. After constant trying and practicing, everything will follow easily until catching fish becomes more convenient and enjoyable.

1 thought on “Fishing with Lures for Dummies – Guideline For Beginners”

As an Amazon Associate, we earn from qualifying purchases. Learn more here.