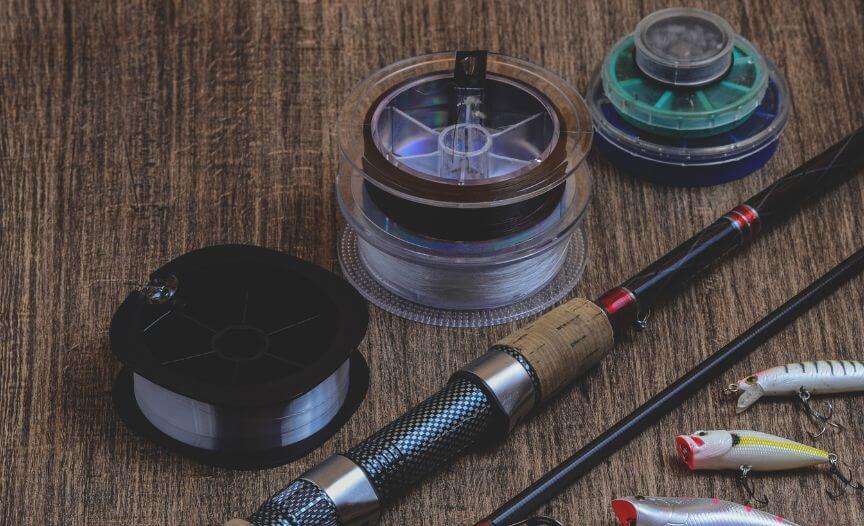 For most anglers, fluorocarbon line is the most obvious pick for a fishing line. It guarantees bass on your bucket whether the odds favor you or not. However, a few other anglers are skeptical about using this polyvinylidene fluoride hard plastic line. This guide will walk you through the in-depth whys, whats, and when of fluorocarbon.

Here’s a condensed read-through of our best fluorocarbon line picks:

At A Quick Glance

Why Anglers Opt for Fluorocarbon Line

Fluorocarbon is said to be near-invisible in the water thanks to its low refractive index. In simpler terms, the material allows a lot of light to pass through making it almost transparent when submerged in water.

A lot of scientists do try their best to debunk these advertising claims. Several tests have been conducted underwater to disprove its “invisibility”. Still, fluorocarbon line proves to greatly help in preventing the fish to detect your line and take your bait without second-guessing.

Submerged in water or completely dry, fluorocarbon lines perform without a hitch. Its characteristics are not changed, weakened, or destroyed on whatever surface. Its sinks easily and can be retrieved as swiftly as when it was cast. Except with knotting and maybe deliberate changes like using any mechanical tools, it performs how it is designed just fine.

Anglers who go for crankbait fishing also opt to use the best fluorocarbon line because it is quite stiff and large enough to fill your reel.

While you sit idle under the shade, half of your line is mostly exposed to sunlight and the other half submerged in water. Unlike nylon, fluorocarbon is more resistant to UV light and less prone to breakdown.

Remember not to dump your discarded fluoro in the water. Just as it is a blessing for anglers to use a fluoro line that’s resistant to UV degradation, it is a curse for many seawater creatures if left unattended.

You do not have to worry about your line getting damaged by hazards under the water like corals, rocks, or pylons even if you go for deep fishing. It may not be as durable as a braided cousin, but it stands strong enough against obstacles that can cut the line or ruin your gear.

This is quite contestable as scientific data shows that fluorocarbon significantly stretches more than a mono-carbon line. Although it requires quite a heavy load to make it break or get it deformed, fluoro retains the shape after carrying any large brass and may not be useful for your next reels.

However, because of this too, it’s easier to detect if something caught your line. As it was cast without load, you will see and feel the difference between a fluoro line with and without a load, and reel in your line before your catch gets away.

Nothing beats the original – and Seaguar’s original blue label fluoro line sits comfortably on top of our best fluorocarbon line list as it has been the most dependable line we’ve ever tried.

This is called a fishing line leader for a reason. It exerted the greatest strength and was easier to tie amongst those we have tried.

One thing we could not forget about this line was how easy it was to cast, reel, and retrieve our line even when we went fishing for bigger brass. They had the least stretch so detecting the bite was stressless. Most of the time we hit where we want the line to land and was pretty felt much more confident on that trip.

It may not be as budget-friendly as other lines could be, so if your number one checklist for buying a fluorocarbon line is the price, then we can move on to our next picks.

It does not boast of the qualities of the best fluorocarbon line we have on the list, but it does play with the many characteristics of fluoro underwater thanks to that coat. It’s less expensive than Seaguar’s Blue Label and somehow recedes in ranks when it comes to its density.

Other than that, it’s at par with the top 1 best fluorocarbon line in terms of the knot strength, handling, and casting.

Another Seaguar fluoro line made it to our list!

Like the original blue label, this red label had great tie strength and resists unwanted tugs and snags from environmental hazards. It got caught once on a few tree twigs and rock when we went fishing in a river but held on and still reeled in a few fish in our buckets.

It did perform exceptionally well as a leading line. We sometimes switched it as our main but we did use it much on as a leader than upfront. It has a lot of memory and is significantly stiffer than other Seaguar lines.

If you’re still getting familiar with angling or using fluoro lines, this might be the best place you can start.

We bought it for less than 10 bucks but performs quite as well as our top 3 best fluorocarbon lines. We probably had the easiest time handling this line as it’s not too nitpicky, stiff, or hard to manage.

It’s widely available so it shouldn’t be that easy to go ahead and try this one. However, sizes may be limited compared to other fluoro lines but if you find yours among the selection then go ahead and see how it can do the job for you!

We don’t see many anglers recommending this but RUNCL’s fluoro coated line takes a spot on our best fluorocarbon line list for 2022.

It has quite the strength we were hoping for and provided a stealthy presentation able to support our cover and bring in the best fish. When we loaded it into the spinning real, it was smoother than we expected and had less memory than Seaguar’s red label.

You might wonder why it’s just on the fifth and not at a higher rank, but it leaves a mark whenever we tie it and rubs together making it harder to manage as time goes by. It does not withstand heat as much as other lines too. So we suggest trying it under cooler weather and in freshwater to avoid weakening the line.

Ready for some unique line? Daiwa’s leader line was far from what we expected – in a good way!

It was our first time trying this brand after hearing about it so many times. It was a compact line but seemed to perform as well as the other leader lines we listed above. It was strong and able to hold up in any water.

It’s less expensive than Seaguar’s or KastKing’s so if you’re a bit tight on budget but seem hopeful for a good leader, then try this one out. We suggest trying this when you’re going for longer casts.

Its label is gold but the line is as clear as any other fluorocarbon lines on the list, making anglers reel in more fish, and get their guaranteed returns.

This is the thinnest leader line from Seaguar and has the maximum impact and knot strength we loved. We’re glad we brought it along when we went deep fishing once and tried it twice when we used our crankbait for the first time.

It’s easier to tie the knots and was clearer underwater. The only thing that seemed off-putting for us was the inconsistency of how it can reel in bigger bass. We figured it was not ideal to use it when aiming for larger fish. We had a few backlashes too so if you’re looking to sport your biggest catch, this might not be your best fluorocarbon line.

It’s the fourth Seaguar here, though we are not promoting any of their lines, we definitely can attest they produce some of the best fluorocarbon lines out there.

We’ll tell you upfront that like any other exemplary Seaguar fluoro line, Tatsu falls on the more expensive side. However, we can say it is worth every penny ONLY if you have quite the experience of using fluoros.

We do believe it’s best on starting on cost-effective lines that do the job and start from there so you can maximize its features when you finally try this for your fishing day.

You can alternate this as your leader line and main line – as we usually do – because they’re just as good as that.

We promise this is the last Seaguar on the list today. We just can’t help but add this one to the list because it did astoundingly as a bait caster and spinning reel!

We did not have any backlash with this line and castability was smooth. It’s not as “invisible” as the other lines but did wonder when we used it in fishing spots with heavy covers. This would work best in murkier waters instead of using it on crystal clear waters.

A regular clench knot may not work for this line as ours went undone. We recommend using a Trilene knot with this line so you won’t lose your lure or catch when it bites your bait.

You’ve come to the end of the list but this is definitely not the least!

KastKing’s second fluorocarbon line completes our top 10 picks this year as it did give us a few buckets full of fish thanks to its overall durability and performance.

The packaging was very confusing – with all the manufacturers and stuff like that. It left a doubtful impression on us so we were skeptical to try it on at first. However, when we tried it as a leader and it did pretty well for its price, considering this might be what you should go for if you’re looking for a new line in many nearby stores that’s not too expensive.

Tip on using this line: Make sure that your line is wet when you pull your knots tight so it does not come undone when you need it the most.

When To Use Fluorocarbon Line as the Main Line

Though these best fluorocarbon lines have quite the advantages, we don’t really use them all the time. We say yes to fluoro when we feel that the leader-to-knot strength won’t work as it’s too weak and might fail us in the middle of the catch.

We love to use fluoro too when we want to lounge more while fishing as its sensitivity allows us to react only by the time it’s obvious something took the bite. Also, go for a fluoro main line when fishing in clearer waters. It provides more sensitivity and boosts your success rate.

We want to make it clear that the ranks don’t necessarily mean they have a huge difference. It was hard to list them like that because they all perform closely well in various aspects. If you want to go for tried-and-tried options, Seaguar and Kastking can be your best friend.

If you’re still new to fluoro lines, go for the cheapest that does its job before you explore other lines. You’re gonna save money and time by doing so.

Whichever line you’re looking to use, make sure to have fun and try not to let the mishaps get to you and ruin the fishing fun!